This wind power project is being developed by a German company, Vento Ludens, in conjunction with landowners at Tomich and Guisachan. Although they have named it Fasnakyle, it is located next to Tomich Conservation Village and includes the previously ‘Refused’ site of Beinn Mhor.

Under the Spatial Framework for Onshore Wind Energy part of this site is in an area of significant protection. The area shown for potential wind farm development further extends to the South and East of Cannich village. See map

The project is currently 46 large wind turbines constructed on the skyline stretching from Beinn Mhor, in a South and Westerly direction, to the Guisachan Forest above Plodda Falls.

Turbines will be seen from parts of Cannich, parts of Tomich, and as far afield as the Black Isle.

The nearest homes to the site are less than 1500m away (about 0.9 of a mile), from the village of Tomich, with the homes at Balcladaich and the settlement of homes at Guisachan being closer. 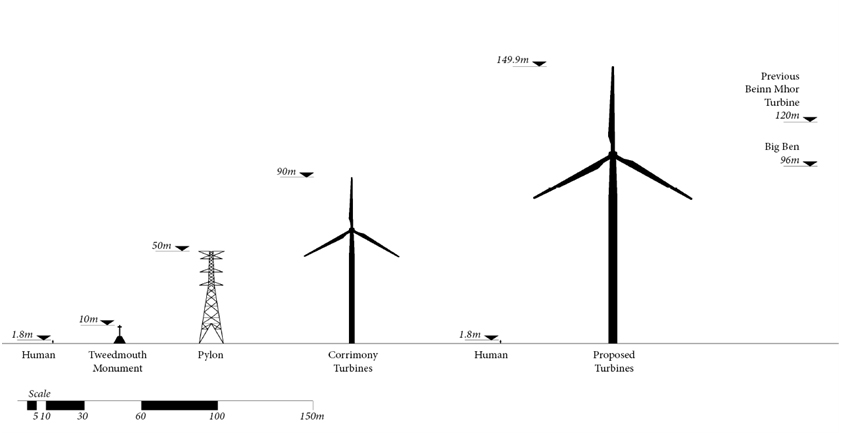 The site is approximately 1.5km from Tomich, about 3km from Fasnakyle, and 5.5km from Cannich.  The developers have not yet announced their proposed route of access to the site, or details of their quoted Sub-Station site, or their Battery Energy Storage site, or their connectivity route.

Each turbine is likely to require a concrete base of up to 20m in diameter, up to 4m deep, plus hard-standing areas adjacent to each turbine location, for off-loading and craning components into position. These can be typically 25m x 40m.

Many new access roads will be built to accommodate.

The Highland Council map of Spatial Framework for Onshore Wind Energy
Showing that if Fasnakyle wind farm proceeds, it may set a precedent, for further development of wind farms along Strathglass.

This site uses cookiesFind out more